Infiniti is all-in on creating luxury electric vehicles (EV) to satisfy the demands of drivers who want luxury, affordability, and sportiness in a sustainable and eco-friendly vehicle. For Infiniti, this means the QX Inspiration concept. It is the beginning of a new generation of Infiniti vehicles, one that establishes a blueprint for how EVs will be integrated into the lineup going forward.

Back to its Roots

The Infiniti QX Inspiration is aptly named, as the design pulls inspiration from its roots and Japanese DNA. In a review of the design, the QX focuses on modernity with elegant creases inspired by origami and unique colour treatments that were inspired by Japanese lacquerware and ceramic work.

The QX concept vehicles follow the Japanese special concept of 'Ma,' which considers the open space between lines to create tension. In the QX, the rear doors open the opposite way - eliminating the divisive post between the front and rear seats. This allows for seamless entry, drawing occupants in from the moment the doors open.

The Infiniti QX Inspiration pays attention to detail in every single element. The headlamps feature a laser-like etching pattern that flows throughout the exterior as well as the interior. Aerodynamics are at the forefront in the QX design as the vehicle features a long, sleek roofline and a sloping, aerodynamically efficient rear.

Infiniti was able to start with a blank slate for its QX Inspiration concept. This allowed them to effectively think outside the box and not fall into the same pattern of design as other vehicles. The lounge-like interior is futuristic with a dominating dashboard that features a polarized gold-tinted wide-screen monitor not found on any other vehicle, no matter the level of luxury. 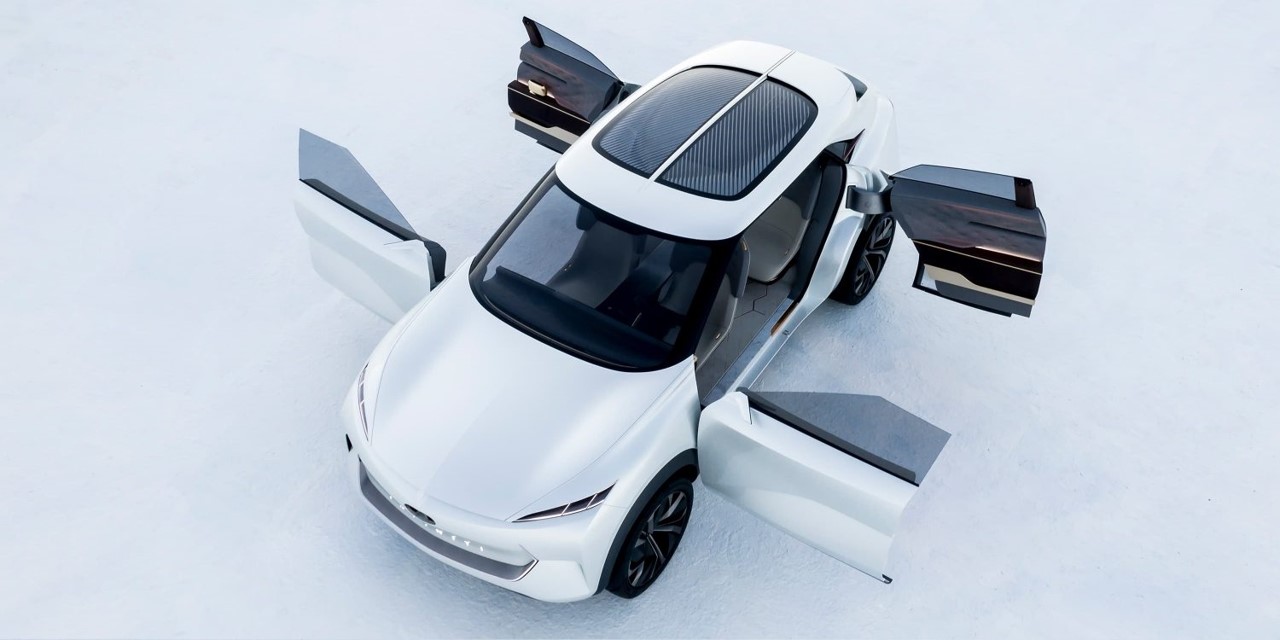 The Japanese influence flows into the interior, found in the calming ambient lighting that is inspired by the colours of spring in Japan. The art, culture, and design are evident in every part of the Infiniti QX Inspiration concept vehicle--allowing Infiniti to stay true to its roots and tie vehicle elements back to its heritage.

The Infiniti QX Inspiration concept focuses on three vehicles, which will be powered by an evolving mix of hybrid and full battery-electric powertrains as Infiniti moves toward a future not dependent upon gasoline. Infiniti's plan is to be completely free of the big internal combustion engines currently present under the hood of many of its vehicles, leaving series-hybrid and fully electric vehicles as the only options.

Infiniti's QX Inspiration is a bold concept--one that has been on display since 2019 with no set date or plan to turn it into a staple in the model lineup. In a review of the concept, it looks and feels great, but Infiniti could have a hard time making it affordable enough to meet the necessary sales numbers.

Drivers anxiously await the day when the QX Inspiration concept becomes a reality, and when it does, if the concept vehicle proves anything, it is that Infiniti will not disappoint.